I am a direct descendant of Johann Friedrich Wilhelm Koch Jnr and his second marriage to Auguste Albertine Braunack. Johann is the second child of the original family to arrive in Australia in 1839. My family information is detailed on page 189 of Koch Connections.

Additional Information (not in the book):

The father of Johann Friedrich Wilhelm Koch 1793-1867 was Christop Koch 1767-1806 as it appears in the Family Bible. However he is referred to as Christoph Koch in the Koch Connections book: 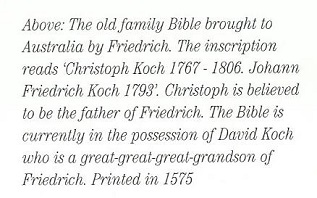 Johann Friedrich Wilhelm Koch's mother and other siblings are unknown.

Rakow (Rackau) as shown in the Koch Connections book is the correct location of our ancestors. The birth place of the 4th born son and the location of the place where Pastor Kavel came from are all within close proximity. Please note the original German names have since been changed to Polish names.

As you can see (by the links below) the location of the 3 towns are all relatively close to each other; within a 15km radius.

Congregation of Pastor August Kavel (the Pastor that come to Australia)