John's son, John Francis Martin, was born between 1836 and 1839 at Norfolk Island and sometimes he is recorded as being born 'At Sea'. This information has been obtained through the certificate of his second marriage to Catherine Theresa Adelaide Jones and his childrens' birth certificates. A birth registration for him hasn't been found.

John Francis Martin's first marriage was to Mary Hayes in 1857 at Carcoar NSW. His age and parents aren't stated, his occupation was Labourer and he was residing at Paddy's Plains near Cowra NSW. Mary's age at her marriage is also not stated but her death certificate reveals she was only 14 years old. She was residing at Lachlan River and her father is recorded as John Hays.

Mary died in 1864 at Macquarie Swamp (Neville) NSW. She was only 20 years and 4 months old. Her death certificate states that she was born at James' Park NSW which was a property located in the Crookwell area and was owned by the Bray family. Mary's parents were recorded as John Hayes, a Shepherd and Ellen (surname unknown). Mary is buried at Milburn Creek NSW in the Cowra area. John and Mary had only one son, Edward John Martin who was only three and a half years old at the time of his mother's death.

Edward was born at Macquarie Swamp (Neville) NSW in 1860. His father is stated as John Francis Martin, occupation Sawyer, born 'At Sea' and aged 24 years. His mother is recorded as Mary Hays, born at Lachlan River and aged 17 years.

Edward's step mother, Catherine Theresa Adelaide nee Jones recorded one son deceased on his father's death at Cowra NSW in 1878. It is presumed this son is Edward as all the other sons are accounted for. All of the deaths checked prior to 1878 do not match. Catherine has proven to be an unreliable informant and further research was conducted into Edward's death.

A death has been located for an Edward John Martin, aged 42 years, who died in 1903 at the Cowra District Hospital. The informant was the Matron of the hospital and she states his birthplace as Neville NSW and his parents as Edward Martin and Mary (maiden name unknown). Edward's father was of course John Francis Martin. It is very common for hospitals not to have correct details of patients.

Matron records Edward's wife as Maria Clements and their children as John Francis 8yrs, Mary E. 6yrs and Ethel M. 3yrs old. It would appear that Edward named his first two children after his parents. This marriage has been researched and the Clements family has been contacted. Unfortunately, they know very little about Edward and Maria. However, their records state that Edward's parents were John Francis Martin and Mary.

John's second marriage was to Catherine Theresa Adelaide Jones in 1867 at Bathurst NSW. John states himself as a Widower, 28 years old, born 'At Sea' and his occupation as Labourer. His parents are recorded as John Martin, a Labourer, and Bridget Cummings. Catherine is recorded as Catherine Jones, 21 years old and born at Bathurst NSW. Her parents are recorded as John Jones (he was in fact William Jones), a Baker and Sarah Newman. Both John and Catherine were residing at Queen Charlotte Vale (Perthville) NSW).

John and Catherine had seven sons. All were born at Cowra, NSW except for their eldest, James Joseph, who was born at Carcoar, NSW: 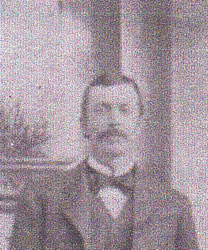