William and Sarah are currently being researched by a group of direct descendants.  It is our hope that we can connect with other descendants or interested parties to assist us in compiling William & Sarah's history.

CHILDREN OF WILLIAM AND SARAH JONES

On 5th June 1819 William Jones along with Thomas Butler and John Clark stole 40lbs of pork to the value of 20shillings, the property of William Summerlin who was a butcher in the Fitzroy Markets.

William, Thomas and John were tried on 7th July 1819 at the Old Bailey, found guilty and sentenced to 7yrs each transportation. William had been found asleep concealed under some straw with the pork near his head. In his defence he claimed he was intoxicated and had laid down in the fields.

The trio sailed on the ship Neptune to Port Jackson. The master of this trip was William McKissock and the surgeon was James Mitchell. They sailed from the Downs on 23rd March 1820 and arrived 16th July 1820 travelling direct for a total of 114 days with 156 male convicts on board. The ship weighed 477 tons and was built at Whitby in 1810.

On the ship indent William is recorded as 21yrs, native place London, a baker, 5'2'' tall, dark complexion, black hair and dark eyes and a mention of Gaol Delivery, Norfolk Island.

William's records reveal that he was baptised at Old St Pancras Church of England, London. A baptism has been found but to date has not been verified: William Jones baptised 1799, parents William John Jones and Ann

On 7th Nov 1839 Sarah was taken into custody after spending 14 days in the House of Correction and then tried at the Old Bailey before Mr Sergeant Arabin on 30th Nov 1839 for obtaining 8lb weight of mutton off John Heard with the intent to defraud him and also for another like offence to which she both pleaded guilty. Sarah was sentence to 7yrs transportation. She then spent some time at Newgate Prison with her records showing her to be 17yrs, a stoutish build and born in Chelsea.

A baptism has been found but to date has not been verified:
Sarah Elizabeth Newman
Baptised 25th May 1823 at St Luke's Church of England, Chelsea, London
Parents, James Newman and Sarah

Sarah sailed on the female convict ship 'Surry' on its 9th trip to Port Jackson. The master of this trip was George Sinclair and the surgeon was Edward Leah. They sailed direct from the Downs on 2nd Apr 1840 and arrived 13th July 1840 taking 102 days with 1 death among the 213 female convicts on board. The ship was built at Harwick in 1811 and weighed 461 tons.

On the ship's Indent Sarah was 19yrs, could read, a Protestant, single, from London and her calling was a kitchen maid, sentenced to 7yrs with a previous 20 days conviction, 4' 10¾'' tall, had a complexion fair ruddy and a little freckled, brown hair and chestnut eyes with a scar on the right corner of her mouth. 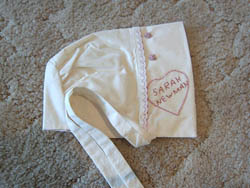 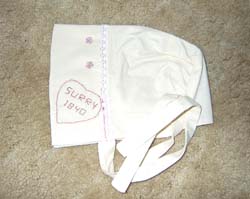